This is a place you have to visit to appreciate, because it is hard to describe. It isn’t just an outdoor gear store like Academy or REI. Daycares actually take field trips here! 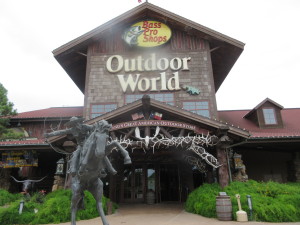 I should state upfront that I am totally morally against killing animals for pleasure or sport, unless they have gills. Kindness to animals is part of my religious upbringing, and this gigantic store, made to look like an upscale resort/hunting lodge, is a shrine to hunting, gratuitously decked out with hundreds of taxidermied animals placed into naturalist poses and settings–almost like what you might see in a natural science museum.

As you ponder all the glassy-eyed animals–including a gigantic bear, a flock of ducks overhead, foxes, skunks, raccoon, elk and bobcats, and hundreds of antlers–you think “all this” just to sell clothing, hunting and camping accessories? And then you think, to ease your conscience, how can these animals be real? I prefer to think they’re not, but facsimiles made in China. The company isn’t telling one way or the other.

Upstairs among the camping gear and shoes is an old fashioned shooting gallery/arcade, a more modern deer and duck shooting game, and other attractions to keep the kids occupied while dads become more “informed” about stuff moms don’t want them to buy. 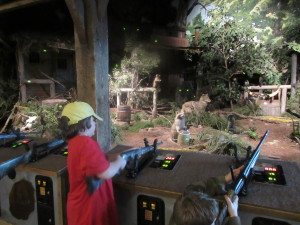 Downstairs is a waterfall, a river and river which kids find irresistible, a humongous fish tank stocked with Texas lake fish, and–I repeat–lots of stuffed animals including bear, bobcats, mountain lions, foxes, ducks, deer and pheasants. My camera apparently had a hangover so everything is blurry: 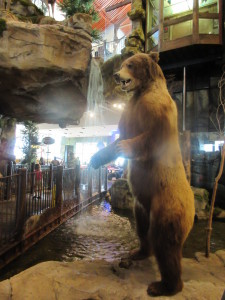 Outside is another river with boulders around it, which the kids also like to climb on and around, along with the boats and ATVs for sale. Salesmen don’t seem to mind at all.

The seafood restaurant attached to Outdoor World offers good atmosphere, good food, good service, spacious booths and relatively quiet, though the menu is somewhat limited if you don’t want seafood. If seafood is not in your family’s budget, there are burgers and salads–a kid’s menu too. The portions are very generous, enough for splitting. Lots of mounted fish on the walls and a salt water fish tank behind the bar with Dorey’s and Nemo’s add atmosphere. 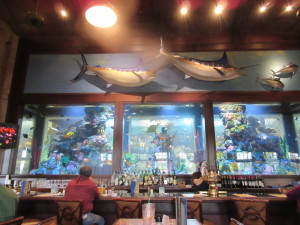 You can sit outside on the patio and view the pond/lake, sometimes people receiving fly fishing lessons. If you remember to bring dollar bills or quarters you can send your kids up to the arcade if they get restless.

Outdoor World frequently sponsors family-oriented and community events. It is not uncommon for boy scouts to set up outside selling hotdogs and popcorn, for there to be pet adoptions of larger hunting type dogs, face painting and calf roping demos.

Every year, Outdoor World hosts a popular charity gun raffle, where lots and lots of handguns and rifles are given to winning ticket holders. A sit down barbeque dinner is included in the cost of a raffle ticket. Other things are raffled and auctioned too, like canoes and kayaks–but the guns are definitely the attraction with this crowd. The money goes to build playgrounds or other community projects. The concept of a charity raffle where guns are awarded as prizes is very “King of the Hill”–but hey, we went, and will probably do it again next year.

My kids like Outdoor World, just to climb on the big boats, mess around in the river, shoot rifles in the arcade, sit on the four wheelers, ride the glass elevator, or press their faces up against fish tanks. The price is right, as long as your husband doesn’t start buying gear he doesn’t need. To curb his enthusiasm, tell him he can get it cheaper at Academy and he’ll probably forget all about whatever it was that caught his eye.