The Galveston-Port Bolivar ferry crosses the waterway between Galveston Island and Bolivar Peninsula, which forms a very narrow strip of land in separating the eastern part of Galveston Bay from the Gulf of Mexico. While the ferry ride, which is free, allows you to see pelicans, seagulls, dolphins or sharks (we weren’t quite sure what the grey fins belonged to), much of the community on the other side was wiped out by hurricane Ike in 2008 (Wikipedia: “Most houses in this area were reduced to either piles or slabs by large waves riding on surge, with only a very few remaining more or less intact.”).

Once you get to Bolivar you may drive around a bit and gawk at the shacks and ruins–and wonder why so many people were waiting so long to cross. I don’t recall the beach being so much better over there either, in case you were wondering.

If you decide to ride the ferry, bring snacks to feed the birds because you can’t buy them on the ferry. It takes about 18 minutes to cross to the other side. 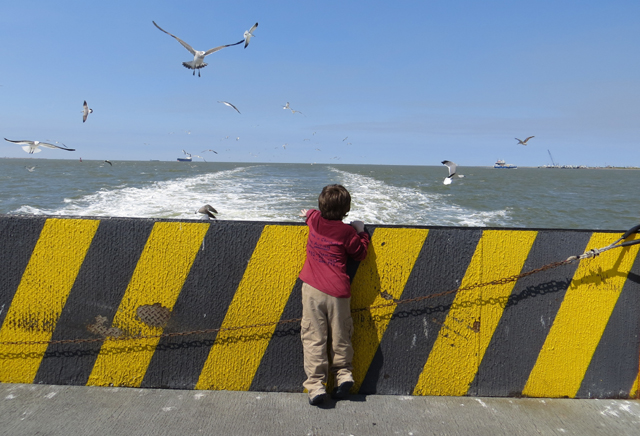 Many people enjoy riding the ferry just for the view of pelicans, gulls and occasional dolphins.