I wanted to put this out here just in case anyone might find it useful.

To spend some 1:1 time with my nt son, I took him on a deep sea fishing excursion yesterday on the Captain John. The link to the ship and prices is here: http://www.charterfishinggalveston.com/Charter-Boat-Captain-John.htm. This ship runs out of Pier 19 by the Strand. We went on the 12 hour trip (7:30-7:30), but the company (Williams Party Boats) runs two boats, the Captain John and the TexSun II. The latter goes on shorter bay trips (4hrs), which might be suitable for autistic kids. 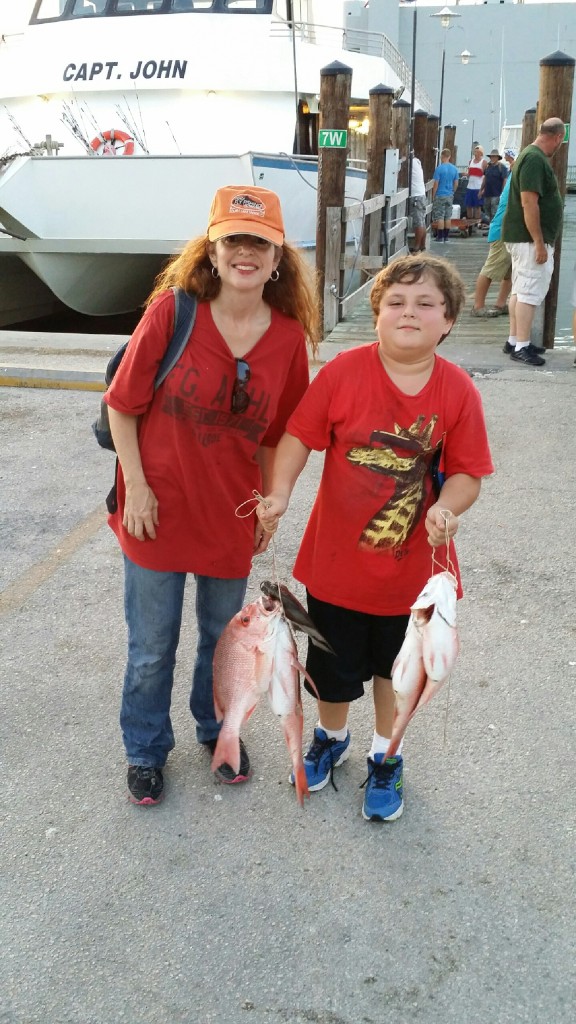 Wonderful experience on the Captain John! Thank you, stranger, for taking our picture and emailing it to me.

The day we went the weather was lovely and the ocean smooth as glass (I forgot my camera and at that time was the last person on earth who lacked a smart phone). We saw a dolphin family playing next to the boat, schooling angelfish and sardines. The deck hands were attentive and patient with my 10 year-old. This was my son’s first time fishing and he caught a few red snapper and an angel fish, with the latter being more memorable than the snapper because no one else seemed to be able to hook one! The poles were not too difficult for a child to manage (you’re basically bottom fishing, not casting out). Someone caught a stingray and a few people caught small king fish. The captain knows where the fish are and he tries to keep things moving, trying different spots when an area becomes unproductive.

Let me lay out the downsides of the experience first so you’ll know what to expect. The strict regulations in Texas make it so that you can keep only two of your snapper. Actually, the Captain John has a special dispensation which allows its customers to keep two snapper, at a time when (outside of snapper season) the state of Texas says no snapper fishing is permitted! So I suppose it’s “a glass half full” sort of situation. My son and I caught our snapper catch limit within the first 30 minutes of fishing, and we along with everyone else had to throw back the rest of the snapper we caught as soon as everyone on board had two (I actually caught 3 undersized and 3 keepers, so one of my snappers was distributed to someone who’d caught only one). Once thrown back into the water, many of these poor fish would float belly up on top of the water, which was distressing all around—the wasted life and the wasted food.

After the wonderful snapper spot, which we were told was on top of a sunken ship, we went to a few other spots to try to catch other kinds of fish we could keep. We didn’t catch anything but an angelfish for the rest of the day. More snappers were caught by other people and had to be thrown back. A few people caught small kingfish.There was one huge snapper caught and thrown back which floated for a long time, and finally Sam Miller, a nice deck hand, asked the captain to navigate over to it to try to help it out. Sam helped the fish live by pushing on it to let air out of its swim bladder and lowering it back into the water. The younger passengers gathered around and watched the fish swim down under the water and disappear. Silent cheer.

They tolerated smoking on the boat even though there are signs that said “no smoking.” This was potentially a big deal for me, because you are assigned a spot on the deck from which to fish, and people smoking (especially off-smelling stuff) right next to you in the heat with a boat rocking up and down can be gagging. Also, where we were stationed there was a lot of diesel exhaust. Due to the smoking and exhaust fumes, I asked that my son and I be moved to a different spot, and luckily someone was willing to trade places with us. If you request a spot (you can if you don’t wait to the last minute), stay away from 58-59 which is where the exhaust is. We really liked our new spots at the back of the boat and it was smooth sailing after that.

Expect a lot of tangled lines and much time spent untangling them. Yes, it is aggravating. You will be shoulder to shoulder with other people fishing. But even if you own your own boat, this is the least expensive way of going deep sea fishing. Plus, you and your child will be pretty much assured of catching something good to eat. That in itself may be worth the expense.

I would not consider taking my au son on this 12 hour excursion. It’s too long for him, and I don’t think he would be able to manage baiting his hook and the fishing poles or getting his hands dirty and smelly from the squid bait. He’d ask to go home and not understand why Mom isn’t turning the boat around to take him home. Plus the ship backs up against the oil rigs (fish are attracted to structure), which are equipped with unpleasant horns which sound off every few minutes–I had ear plugs with me, but it was still unpleasant (–“but totally worth it, Mom,” said my nt son).

However, I might try with my au child some of the shorter trips or eco-tours offered by this company to take him to see dolphins and other wildlife. A dolphin family with a baby came right up to boat. Oh I wish I hadn’t left my camera at home that day. . .